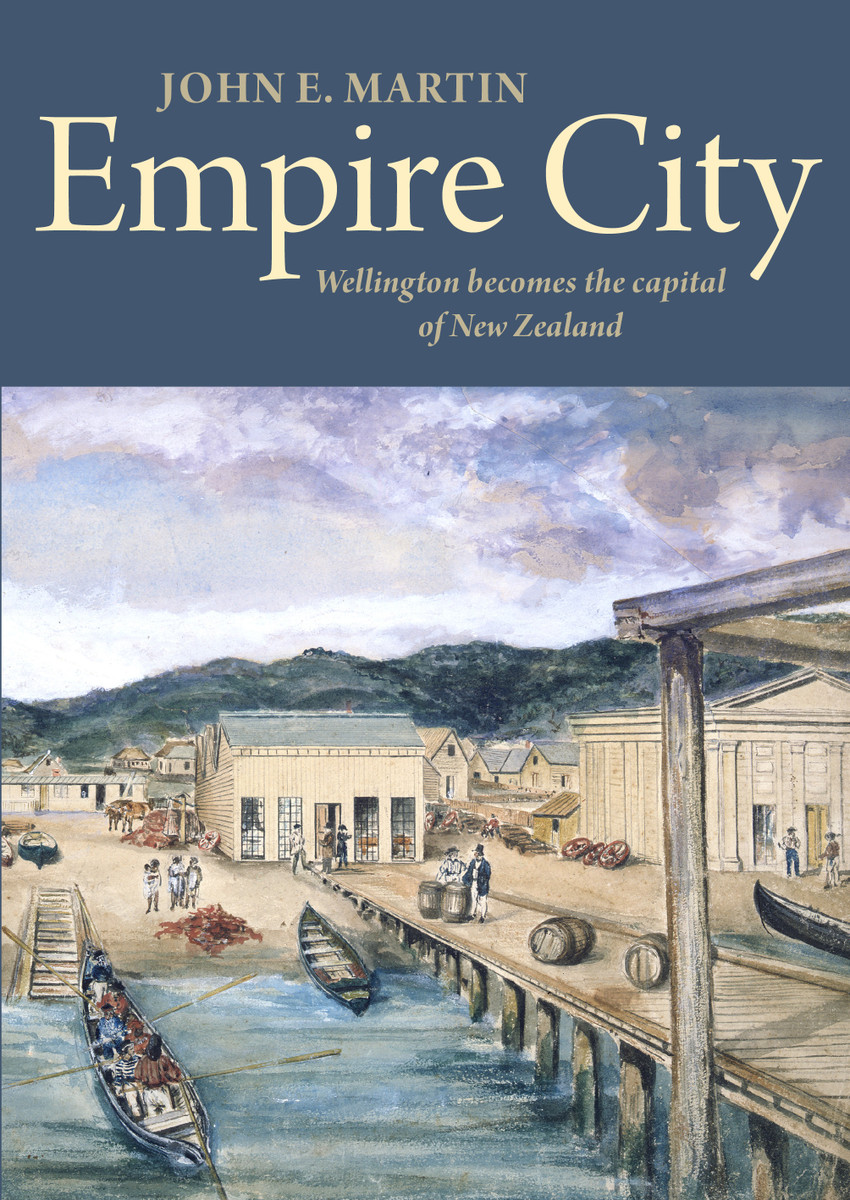 Empire City: Wellington Becomes the Capital of New Zealand takes Wellington from the first encounter between Māori and the New Zealand Company in Te Whanganui-a-Tara in 1839 to its becoming the Empire City by the 1870s. It tells the story that began with a small and fragile New Zealand Company Pākehā settlement relying only on whaling and racked by earthquakes. The story is how Wellington created a durable economic base and became a thriving political and commercial centre and the capital of New Zealand. With a prospering rural hinterland, an energetic mercantile community and an expanding port, and the administrative structure of central government, Wellington in the 1870s could look forward with confidence to its future as Empire City – the central nexus of the country and the local nexus of empire.

Empire City brings the story of Wellington to life, from the invasions of iwi from further north in the early 1800s and uneasy coexistence of different iwi to the purchase of land by the New Zealand Company and the beginnings of Pākehā settlement. Whaling was replaced by pastoralism, the mercantile community rose to prominence, and a viable town with a polyglot population was established. The tales are wide-ranging and compelling, from politicians butting heads, to merchants prospering and others going bankrupt, to earthquakes and shipwrecks, Māori endeavouring to keep the peace or resisting the depredations of Pākehā settlement, the impact of the military in town, the citizenry’s establishment of a variety of social institutions and their enjoyment of diverse entertainments and sports, tales of the distressed and unfortunate underclass as exposed in court, and prisoners escaping from gaol.

For its long-term future Wellington needed to secure a rural hinterland but it was hemmed in by rugged hills and heavy bush and the lack of land further north. The war that erupted in 1846 consolidated British sovereignty, purchases of land in Wairarapa and the west coast and the extension of roading helped the town gain a stronger economic footing, while its commercial sector developed apace. Gaining its own provincial government allowed a voice for Wellington and the long campaign began for it to become the capital. Political deadlock and the involvement of the lower North Island in the wars for a time hindered the town’s development and its agitation to become the capital, but in 1865 what had been a long-held dream became a reality. Wellington had truly become the Empire City. In the contributions made by Māori, the New Zealand Company, early Pākehā settlers, merchants, shopkeepers, working people, worthy and less worthy citizens alike, together with a host of institutions and organisations, we appreciate how Wellington came to be from such unpromising beginnings. This diverse, rich and turbulent story is the key to understanding Wellington’s status as the capital of New Zealand.

Dr. John E. Martin has researched and written about New Zealand history since the 1980s, teaching in universities and employed as an historian in the public sector. He was parliamentary historian in the 2000s and 2010s. His publications include rural and labour history, the history of science and engineering, and social and political history. His books include The Forgotten Worker (1990), People, Politics and Power Stations (1991 and 1998), Holding the Balance (1996), The House: New Zealand’s House of Representatives, 1854–2004 (2004), Parliament’s Library (2008), Honouring the Contract (2010), Illuminating Our World (2017) and A Colonist’s Gaze (2018). He currently works as a freelance historian and is increasingly involved in heritage-related projects. A biography of Isaac Featherston is the next major work in prospect.

Pursuing Peace in Godzone: Christianity and the Peace Tradition in New Zealand

Creative Victoria: A History of 119 Years of Creativity at Victoria University of Wellington

Democracy in Aotearoa: A Survival Guide