On Wednesday 20 April, we launched Another Beautiful Day Indoors by Erik Kennedy at Scorpio Books in Christchurch. Here's what poet Joanna Preston had to say about Erik's new collection. 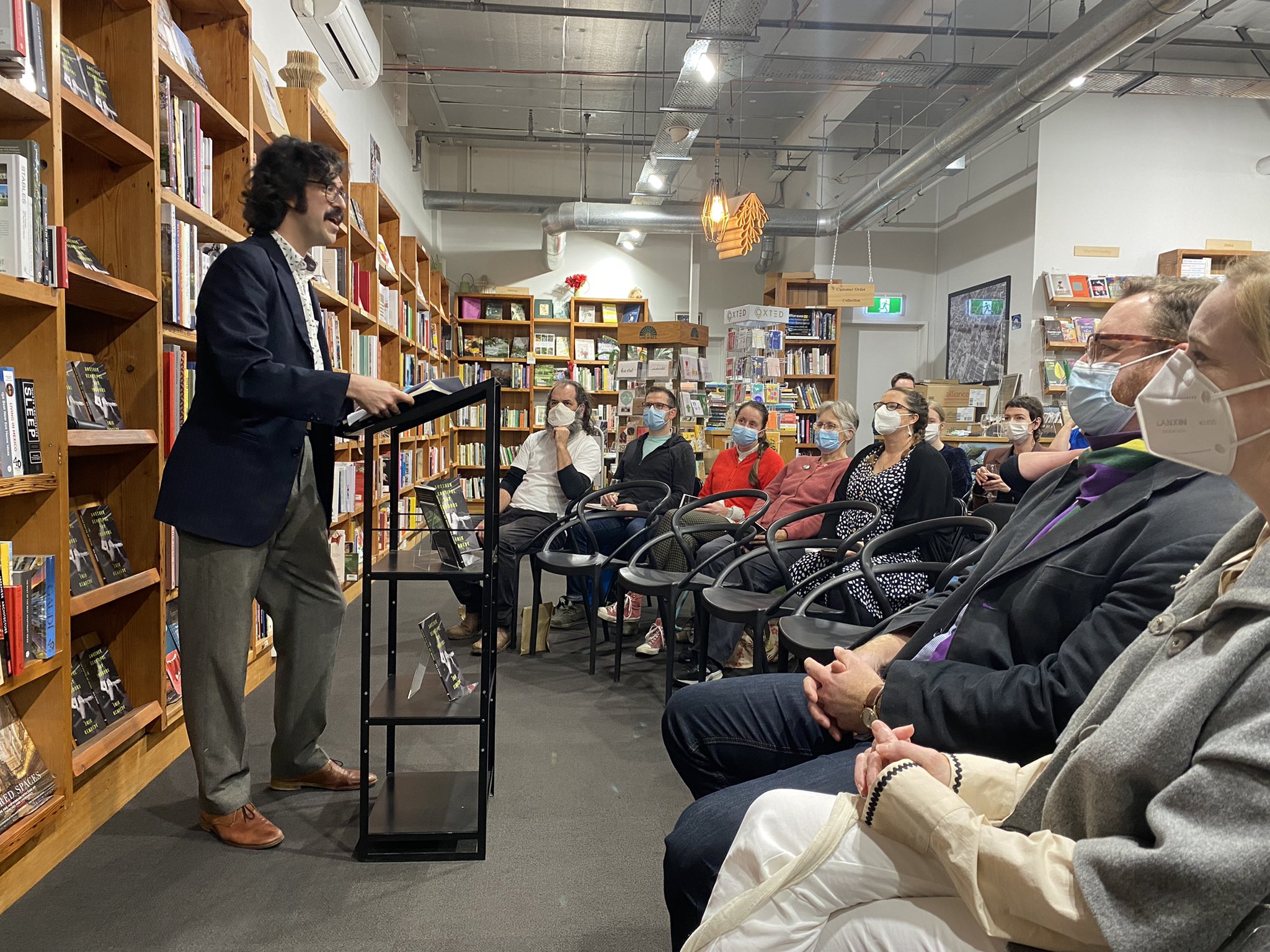 Erik Kennedy is one of those poets it’s useful to look at sideways.

We know he’s originally from New Jersey, and lives in Heathcote. He is a vegan. He has cats, and an increasingly magnificent moustache. These things may be related.

He also does a huge amount for the poetry community. He is poetry editor and board member for takahē magazine, a member of the Canterbury Poets’ Collective Committee, a regular at Catalyst, an insightful reviewer and poetry critic, and has just finished editing No Other Place to Stand, an anthology of climate change poetry with Jordan Hamel, Rebecca Hawkes and essa may ranapiri. He is a busy lad.

An anagram of ‘Erik Kennedy’ is ‘Eek, Inky Nerd’, and indeed, one of the great pleasures of Erik’s poetry is how lightly it carries its erudition – there is always this feeling that no matter how esoteric and unpoetic-sounding a subject may be, Erik will find a way of making it not just work but shine, whether that’s microplastics, phosphate mining or planned obsolescence.

His first full collection, There’s No Place Like the Internet in Springtime, was a funny, wry, thoughtful and entertaining collection. Except … quite a few of the poems there wore their humour in the same way that a pickpocket wears a look that says they’re definitely concentrating on something over there, look, wow isn’t that crazy and definitely not sliding their manicured digits into the pocket where you used to keep your wallet.

So, what of this new collection?

One anagram of Another Beautiful Day Indoors is ‘Fade Your Outlandish Baritone’, which at first I took to be a coded reference to Erik’s reading voice. But another way of looking at it is the change in address between No Place Like the Internet in Springtime and Another Beautiful Day Indoors. Superficially, the two collections are similar – the same abundant skill with rhyme, the same ability to turn any subject into a poem, the same plethora of glorious phrases – from the title poem, for instance, we have: 'I haven’t left the house today because there’s only one reason / to do that, and I’ve already got goat cheese.'

But the best poets don’t stand still, don’t stay with the safety of what has worked before. And the world has gotten a lot darker since his first book came out. So Erik’s work has also changed. Yes, there is still humour, but there is a point to it, a bite to it.

These are the slow loris of poems – superficially cute and cuddly, with enormous eyes, but possessed of a lethal bite. In the case of the slow loris, the toxin comes from a gland in their armpits, which they lick.

In the case of the poems in Another Beautiful Day Indoors, I don’t think licking armpits is part of the strategy. Instead, there are poems that start funny or whimsical, but end with a twist to the image that pulls away not only the rug from under your feet, but also most of the floorboards and a good couple of metres of soil. Poems that clap you on the shoulder, pick your pockets, and also slip a delicate stiletto between your ribs.

Lives of the Poets

There is the possible world in which,

having no safety net

to fall into, I killed myself.

There is the world in which

Sex Owls of the Sun,

and the effects of success jaded me,

so I stopped pursuing

the art that I loved.

And there is also the world that was

a succession of cool, forgettable evenings

spent among canapés and loud friends,

in which we aged so slowly

that we hardly noticed it,

until it blurred our vision

You start with the trope of the doomed poet – stated in a way that feels like a joke, but not completely. Then he moves you into a middle stanza that feels entirely silly – ‘Sex Owls of the Sun’, for heaven’s sake – but ends with the comforting reassurance that yes, yes, you can trust him, after all this is the art that he loves, he’s only poking gentle fun.

And then that lovely-seeming final image of lots of time with friends and food and nothing dramatic happening, just time passing.

Except … damp creeping into a camera isn’t a minor thing. It speaks of long neglect, decay, dissolution. The blurred vision isn’t just age-related myopia. And these comfortable, comforting evenings are forgettable, and our friends are described as loud. So what does that make us? In the words of Mary Oliver, what does this mean we have done with our one wild and precious life?

Erik’s nickname at school was ‘The Iron Stringbean’. An anagram of ‘Iron Stringbean’ is ‘Hasten Inborn Tiger’ and these poems do demand that we hasten – that we pay attention to the harm we do, to the harm that others do. That we ‘Please Stop Killing Us and Destroying Everything That Sustains Us’, to partially quote a title. In the midst of absurdity, he reminds us that there is such a thing as moral responsibility.

The poems in Another Beautiful Day Indoors are less whimsical, and more pointed than those of No Place Like the Internet. Still frequently playful, but this is now the sort of play that acts as a kind of combat training. Erik’s not standing on a soapbox, preaching, but he is using his considerable skill to bring his readers face to face with some ugly truths, even as you laugh. And you will laugh.

It’s funny, sad, poignant and pointed and political and polished. It purrs like a sunroom full of petted house-cats – coincidentally another anagram of Another Beautiful Day Indoors is ‘Stealthy Ironed Boudoir Fauna’.

To sum up, I’ll leave you with one of my favourites. From page 21:

You know those bells

used to have rigged

so if they weren’t really dead

and they woke up panicked

in their best clothes

they could grab the bell-pull

and some freelance grave monitor

would hear the tinkling

That, but for love.

So if an apparently dead feeling

sometime after it has been seen to expire,

after it has been prepared and dressed,

and lowered into the earth,

let it have a final chance

before it’s forgotten by everybody,

having scratched its fingers bloody

on the inside of the lid. 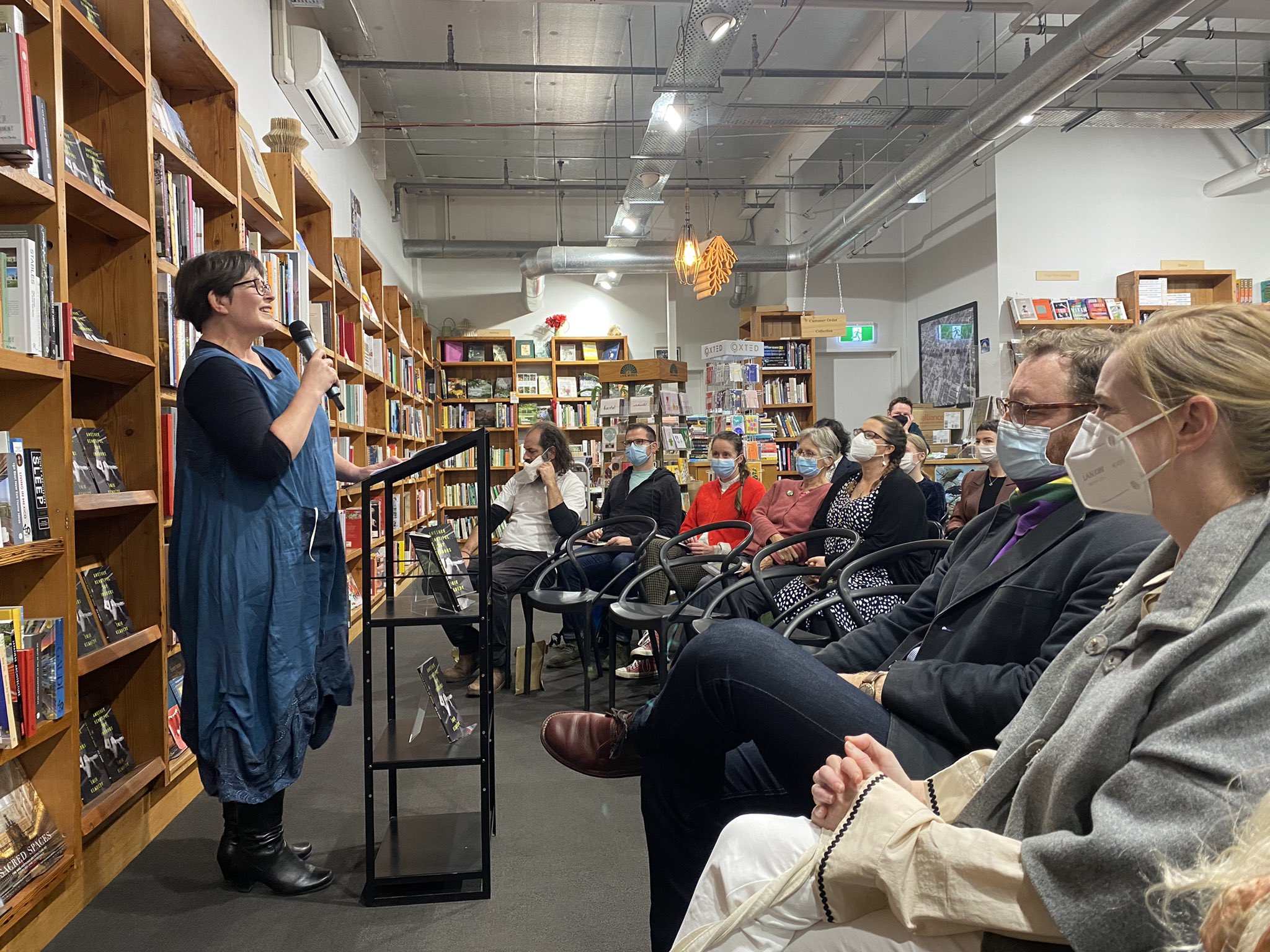