Amy Brown’s new poetry collection Neon Daze was published this month. It’s been six years since her last book, the remarkable and brilliant epic poem The Odour of Sanctity. A lot has happened for Amy in the intervening years, including the birth of her son Robin, who is the inspiration for her new book. Neon Daze is a brave and fiercely honest verse journal about Amy’s experience of the first four months of motherhood. Poet Therese Lloyd asked her a few questions.

In a recent Spinoff article, you quote from Maria Tumarkin’s essay ‘Against Motherhood Memoirs’ and that after reading her essay you worried your own book might be ‘the wrong kind of motherhood book.’ Tumarkin says ‘what is required [of motherhood memoirs] is formal innovation, hybridity of form, opening up of language, a getting at and through motherhood in unexpected ways.’ But I think Neon Daze does exactly this! Or are you not convinced?

Thank you! On a good day I hope that this is what Neon Daze is, but on most days I see the banality of my own perspective and the profound privilege that the life I describe contains and I think, does the world really need another middle-class white woman writing about buying coffee beans? Tumarkin’s essay (which I highly recommend) does dismiss identity politics’ place in the excoriation of motherhood memoirs, but the identity-based discomfort still lingers for me. Why make a noise about my relatively easy and comfortable life? The only answer I have is that I needed to make a noise. I don’t know why. I find this need slightly embarrassing. But it’s true.

While I’m not sure I’d claim that Neon Daze is formally innovative (there were plenty of influential precedents that helped me find my way to this form), it was new for me, and has allowed me a way to convey what I need to with an urgency and immediacy that I don’t think I’ve managed before. Or, perhaps the urgency and immediacy of the material shaped the form? Earlier this year, a colleague of mine, during an English staff meeting that ended up discussing rubrics and essay templates, mentioned that “form” is the word for the shallow indent a hare makes in the ground, fitted to its body. That’s how I see the form of Neon Daze, a structure made by and for the body of the material.

Now that the book is out, is there anything you would do differently? Did you worry about how others might read the book, particularly your partner and other family and friends who appear in the book?

Now that it’s out – launched in front of many of the people it features; now that those closest to the book have read it or are reading it, and the world hasn’t ended, it’s easier to say that I wouldn’t do anything differently (but that is probably more to do with not knowing how to have done anything differently).

I did worry – a lot – and still do. Maybe I should’ve shared it more widely before sending it off to be published (for instance, emailed my parents a version before handing the actual book to them half an hour before my first session at Verb Festival). Maybe I shouldn’t have published it at all. Maybe the stress it’s caused, worrying about its effect and reception, or the position it put my partner in (I offered him the chance to veto it before sending the manuscript to VUP, but he said no, he’d read it when it was published; a few weeks ago, he revised this position to being that he didn’t see a choice in the matter – such experiences are a side effect of being married to me, apparently), or the way it will eventually be received by our son, or the unknown pain or offence it might have caused friends or family members written into it (or omitted from it) – maybe such risks outweigh any potential benefit publishing the book could have. These worries are alive and well in me most of the time, though now challenged occasionally by the gratification of hearing from people who’re reading it and getting something from it.

At the launch, last Thursday, I said I was proud of what I’d made, which felt like a radical departure from my (female? New Zealander?) inclination to apologise for, regret, or generally undermine the book. For the hour or so of the launch, at least, I made myself quiet the worries and trust in what I sometimes believe: that Neon Daze is about as close as possible to what I hoped it might be. And, then this sense of achievement is bowled over by another wave of anxious self-recriminations . . .

What about the process of editing? How did you approach this given that the material is so much about the present lived experience?

I can’t remember how I started editing. It was interesting when I dug out one of the notebooks a few weeks ago to take a photo of a page to go with the Spinoff article, seeing how close the original scribbles were to the version that ended up in the book. But, then, the handwriting was (by my low standards) quite good, so there’s the possibility that I’d already rewritten that entry – copied it off the hospital serviettes that the whole thing started on and put a tweaked version into the notebook. The sleep-deprived amnesia of those months makes the process foggy and mysterious.

What I can remember (as it only happened this year) is working with Ashleigh. Ashleigh was the ideal editor, reader, person (really) to kindly and respectfully nudge the entries into the right direction. She understood the ugliness and bagginess of the original was important to the, as you say, present lived experience. But she was also attuned to inconsistencies in the voice – lapses of overwriting, cliché, trying a bit hard. The changes she made to the manuscript, while subtle and sensitive, lifted it considerably. I remember after she sent me the first round of edits that I had a bit of a panic. Focussing on the worst, sloppiest bits made the whole thing look irremediably unpublishable. But, once they were gone, it immediately looked less awful.

The idea for the footnotes came from a talk at a conference I went to back in 2017, ‘Poetry and the Essay’ at Victoria University (which you were at too!). Shamefully, I can’t remember the name of the presenter who spoke about novel, politically subversive uses of footnotes, but I do remember the quiet epiphany that happened during that talk. There were lots of epiphanies during those few days of the conference, where Jenny Bornholdt gave a keynote address that left me in tears. Fortunately before I started weeping I was able to ask her a question about writing family, children especially. I’m probably misquoting, paraphrasing wrongly, but I remember her, with that gentle firmness that comes across in her poetry too, saying, ‘I don’t draw a line.’ I took this as a kind of permission to begin considering my notebooks of hyperpersonal scrawls as poems. Another significant source of permission was Brian Blanchfield’s collection Proxies, in which each essay has the epigraph ‘Permitting Shame, Error, Guilt, Myself the Single Source’. Brian was, blessedly, at the conference too. Over lunch one day with Joan Fleming and Paula Green, when I confessed something like ‘Now that I’m a mother I don’t think I have the right to publish anything ever again!’, he suggested I read The Argonauts by his friend Maggie Nelson, which, as a model of intimate, philosophical memoir, became another crucial form of permission. One more influence was Rebecca Solnit’s The Faraway Nearby, which has that final essay snaking in one long line along the bottom of every page.

I’m aware that I’m rambling (sorry), but the point I’m trying to get to is that there were influences that helped me decide to add footnotes as a means of containing, protecting and refining the raw material of the journal entries.

In the Spinoff article, I think I say that below the footnote line the writing is more concerned with abstraction, language and meaning, as a balance to the bodily nature of the writing above the line. It’s not really as simple a distinction as that; in fact, I think that’s broadly what the book is about – the mingling of abstract and concrete, idea and feeling, empirical and rational.

On the last page, I describe the footnotes as a kind of weaning; the desire to keep adding and adding to the book that had to end eventually being akin to the breastfeeding of an infant well into toddlerhood. That was a significant reason for the footnotes too – an inability to find an easy ending.

Can we talk about the amazing cover artwork by Séraphine Pick? How did you come to select this work and where did you first see it?

Yes! I have loved Séraphine Pick’s work since I was a child. I remember this kids’ art show at the Hastings library when I was about ten, where every print was $30 and no adults were allowed in the room, only children (very middle class, I know). Anyway, there was this black, white and yellow print of elongated feminine figures that I kept looking at and looking at. It was by Séraphine Pick. So, that’s where it started. Twenty-five years later, scrolling through Instagram, I saw this this exquisite, double-faced, placenta-brained, scribbly, bright drawing and knew – after months of not having a clue what would work – that this would make the perfect cover for Neon Daze. I feel incredibly lucky that we were allowed to use it. Thank you, Séraphine! 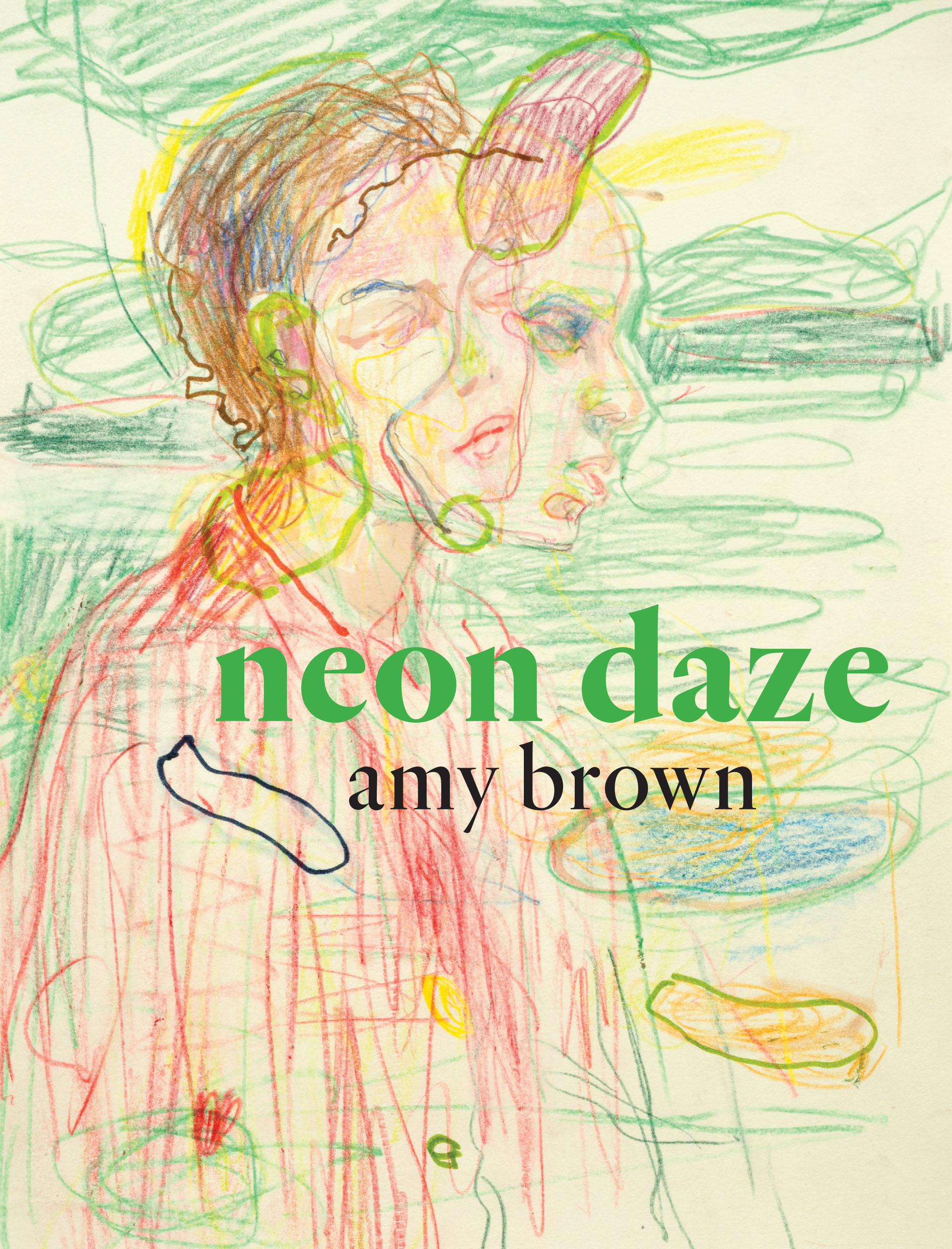